Proxy Power: How Shareholders Are Using Active Ownership to Take On the Opioid Epidemic


The Sisters of St. Francis of Philadelphia are far from the largest shareholders of AmerisourceBergen (NYSE: ABC), one of the country’s so-called big three drug distributors.

But that didn’t stop the Aston, Pennsylvania, community of approximately 400 Catholic women from exercising their shareholder rights. In 2017 they asked the company’s management to produce a report that examined the role AmerisourceBergen plays in the opioid supply chain. They also requested that the company consider the risks it faces as a distributor of opioids.


Nuns aren’t the only shareholders AmerisourceBergen and other drug companies are contending with. The International Brotherhood of Teamsters as well as the treasurers of multiple states are leading shareholder campaigns aimed at opioid distributors.


As you can imagine, there isn’t much overlap in membership between these three groups, but they share a common goal when it comes to tackling the nation’s opioid crisis. So it made sense for them to band together to form the Investors for Opioid Accountability (IOA), a coalition of investors seeking to hold pharmaceutical manufacturers, distributors, and retailers accountable for risks to their shareholders and to society at large as a result of their business involvement with opioid medication. Today, the IOA represents 54 institutional investors of all types, amounting to $3.5 trillion in invested assets. It has pressed drug distributors on issues such as separating the roles of CEO and board chair, disclosing when executive incentives have been recouped (clawbacks), and considering legal settlements when calculating executive pay.


At the heart of the IOA’s requests is a straightforward, timeless corporate governance message—that executives should be rewarded for creating long-lasting company value and, importantly, not be tempted to put the company into risky, shortsighted positions. But the IOA’s origin story is also a great answer to a question investors often ask themselves: How can I change corporate behavior? After all, I own only a fraction of this company—why would management bother to listen to what I have to say?


What one proxy vote can do


You may not have the time or the wherewithal to sit down with company management or put together a shareholder proposal. But you can still practice active ownership. You have the power of the proxy vote, which gives you the right to vote on other shareholders’ proposals and for (or against) board members who may (or may not be) aligned with your way of thinking about corporate governance.


So what can one vote do? Perhaps not much alone, but a lot together. You can, of course, choose to vote your own proxies. Or you can give proxy-voting authority to an asset manager if you’re convinced that manager’s tenets around proxy voting align with yours. Because they have authority to vote for many of the investors they work with, such managers bring more clout to proxies, helping you, like the Sisters of St. Francis, wield greater power than you could alone. 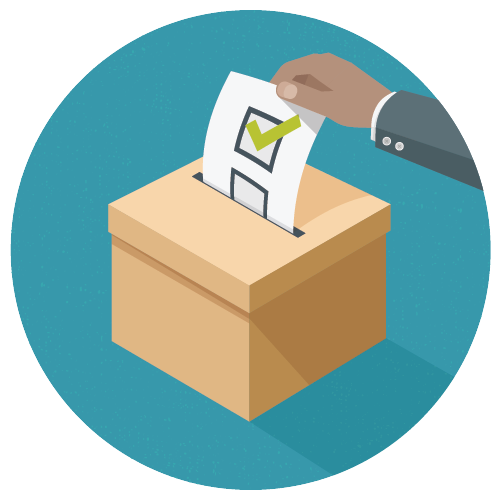 The results of active ownership
The Sisters of St. Francis proposal garnered a very strong 40% support—a figure that’s all the more impressive considering it was the first time it had been on the AmerisourceBergen ballot. In turn, the drug company has since promised to create the requested report by the end of the third quarter of 2019.


Meanwhile, the IOA successfully persuaded AmerisourceBergen to separate its CEO and board chair positions. The company was a holdout among its peers, who had already made this crucial reform. Opioid manufacturer Teva Pharmaceuticals responded to a similar proposal that wouldn’t exclude legal settlements in executive pay calculations.


According to the Centers for Disease Control and Prevention, more than 47,000 people died in the US from opioid-related overdoses in 2017, or about 130 a day. The big three drug wholesalers—AmerisourceBergen, McKesson, and Cardinal Health—control more than 80% of the market that moves pharmaceuticals from manufacturers to pharmacies and hospitals. That’s a lot of accountability, and shareholders (even smaller ones) have demonstrated that, when they work together, they can use active ownership to hold those companies accountable. Every vote counts, and this becomes especially true when good corporate governance becomes a matter of life or death.

What Investors Can Do About Human Trafficking

Modern-day slavery. Forced labor. Whatever you call it, human trafficking is a difficult problem to solve. But investors can help—and keep it out of their portfolios.

Faith-Based Investing: Why We All May Be Singing from the Same Book of Hymns

Whether we’re faith-based investors or not, our long-term goals are likely not all that different. Here’s why.

Are There Cannabis Stocks in Your Portfolio? Here’s the Straight Dope

As marijuana legalization expands and as investment grows in the industry, cannabis stocks’ footprint in the major equity indexes remains small. But that could change.

Can Socially Responsible Investors Raise the Tide for All Investors?

Does responsible investing help or hurt returns? We get this question a lot. But there’s another, perhaps more interesting, question that’s also worth exploring.

Emerging market companies have different standards for ESG issues. What does this mean for investing in emerging markets if you’re a responsible investor?

Passive Voice: As Index Investing Grows, So Does Active Ownership

As assets continue to flow from active management to index investing, passive shareholders will still hold companies to account.