What China’s Currency Manipulator Label May Mean for Emerging Markets


Is China intentionally lowering the value of its currency in an effort to reduce the price of its exports, in effect undercutting US tariffs? The US Treasury Department thinks so.


It’s not just the Trump administration. Many believe China has persistently kept its currency artificially weak relative to the US dollar in an attempt to support an export-driven economy and promote domestic growth. Regardless, with the formal designation, Mnuchin will now have the opportunity to work with the International Monetary Fund to remove China’s perceived competitive advantage. Under normal circumstances this would mean the US would attempt bilateral negotiations with China, urging the country to reverse course or face harsh repercussions. With both sides already locked in a heated trade war, however, it seems unlikely that the normal course of action will play out.


For their part, the markets took the news terribly, with equities around the globe selling off on the events. The reason? Uncertainty. Clearly the risks have gone up in the trade war, and an all-out currency war between the two countries could be catastrophic. But even more than that, for the first time in nearly three decades the US has formally designated another country a currency manipulator, and the basis for the designation appears to have strong political undertones. With a number of other emerging markets already catching the eye of the US Treasury, the risk of future confrontations feels greatly elevated.

China’s currency manipulator label: How did we get here?
Twice a year the Treasury prepares a report for Congress in accordance with separate legislation from 1988 and 2015 that reviews the macroeconomic environment and foreign exchange policies of the US’s major trading partners. In the most recent report, from May 2019, the Treasury included China on a monitoring list, indicating special concern about its currency practices and macroeconomic policies. The decision was based on China’s violation of two of three separate criteria set out in the 2015 legislation, which looks at countries with significant trade surpluses with the US, large current-account surpluses, and a history of one-sided currency intervention. However, under separate standards set forth in the 1988 legislation, the country wasn’t deemed to have manipulated its currency to gain an unfair trade advantage.

Though no formal designation was made in the May report, the Treasury promised to continue monitoring the situation for any changes in Chinese policy. It didn’t have to wait long. In early August, following news of additional tariffs levied by the US, China’s central bank allowed the Chinese yuan to weaken sharply, moving below a key level of seven yuan to the dollar not seen since the global financial crisis.


Chinese yuan to one US dollar 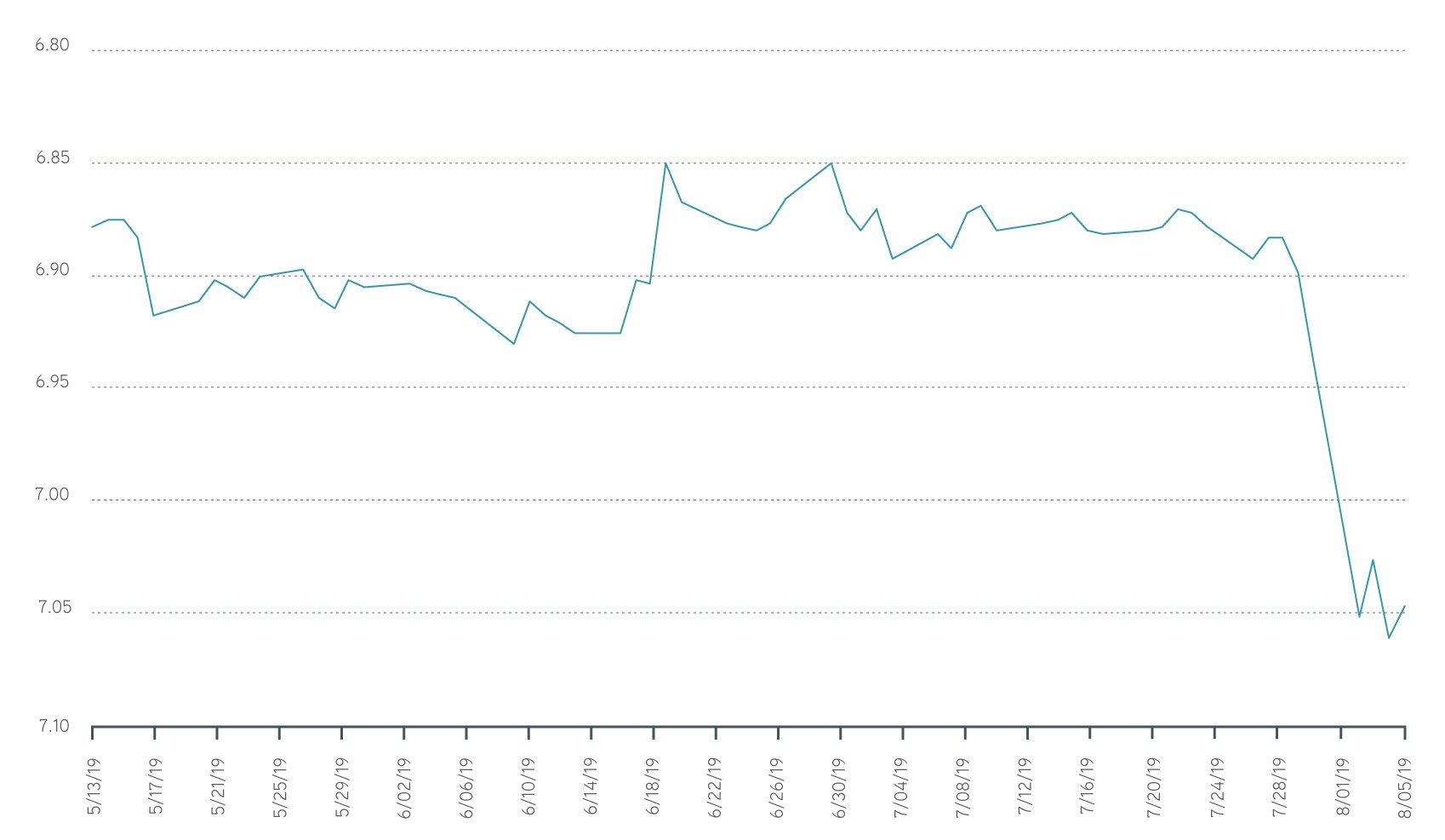 
China’s central bank allows trading of the yuan, but only within a narrow band around a midpoint it sets each day. Currency depreciation in the face of a weakening Chinese economy and a US-China tariff war seems not entirely shocking. But this appeared to give the Treasury an opening for making the currency manipulator designation, something the department hasn’t done since 1994. This stoked fears that the trade war between the two countries was turning into a much more dangerous currency war.

Learn more
What does China’s currency manipulator label mean for emerging markets?
With the aggressive tack taken by the US in calling out China, even though it wasn’t clear that it met the criteria for manipulator status, it seems natural to question which other countries on the Treasury’s radar could be next. From the most recent report submitted to Congress, the biggest risk seems to lie in other Asian economies—in particular Korea, Taiwan, Malaysia, Vietnam, and India. All have attracted the notice of the US government lately.


Yet it seems no country is off limits if it runs a trade surplus with the US and has a history of currency intervention to limit appreciation or devalue its currency versus the dollar. This is especially the case if the country also runs a large foreign exchange reserves balance that it could deploy to strengthen its currency during periods of excessive weakness.


This could prove troublesome as global growth begins to decelerate and countries look to their monetary tool kits to support their economies. Notably, the go-to move of lowering short-term interest rates to boost or stabilize growth may get tossed out the window, lest this tactic put the country directly in the sights of the US if the move weakens its currency versus the dollar. Fearful of being added to the “currency manipulator” list, many countries may have to look to other forms of stimulus for support, with the likely outcome that we see more uncertainty and less transparency around government actions in the emerging markets.


The bottom line
Though many see naming China a currency manipulator as long overdue, the sudden shift in opinion by the Treasury shows how quickly things can change in the emerging markets—and adds a great deal of uncertainty to the markets going forward. With many countries, particularly in Asia, running trade surpluses with the US and practicing some degree of currency intervention, it’s possible more of these cases may come up in the future. At the very least, with the slowdown in global growth well underway, China’s new label as a currency manipulator may make many countries more hesitant to employ tried-and-true monetary measures to restart their engines. It’s a situation that may lead to less transparency going forward—and more spikes in volatility.

Understanding the Zigs and Zags of Emerging Markets

We believe there are solid reasons to own emerging market equities as a means of diversifying portfolios across markets, minimizing risk, and maximizing growth opportunities.