Making Sense of Lower Readings on the Market’s Fear Gauge


After staying above its long-term average throughout 2020, an important volatility index is seeing a significant drop. We look at what this means for options buyers.

The Cboe Volatility Index ® (the VIX ®  Index)—often referred to as the “fear gauge”—rose sharply during the first quarter of 2020 and remained above its long-term average for more than a year. It fell below 20 for the first time in late March and, more recently, has printed levels well into the mid-teens. The VIX ® Index represents the market’s equilibrium forecast for realized volatility over the next 30 days. One interpretation of the lower VIX ® Index is that the market is anticipating significantly lower volatility than it was months ago.

What’s the catalyst for this drop? Could it be that optimism around vaccine rollouts is stemming the demand to hedge, resulting in a lower equilibrium price of options? Or is the drop simply a formulaic reaction to the 5.8% climb for the S&P 500® in Q1? Let’s examine the impact of two factors that heavily influence changes in the VIX® Index: the S&P 500® price and the implied volatilities curve.

First let’s examine the VIX® Index calculation. In essence the VIX® Index is designed to provide tick-by-tick estimates of how much the market expects the S&P 500® to fluctuate in the next 30 days. The model incorporates prevailing bids and offers of options with 30 days remaining till expiration (interpolated using two expiries, when necessary). Each option contributes to an aggregated variance, which is then annualized before multiplying its square root by a factor of 100. While the full details are well beyond the scope of this blog, an important feature of the VIX® Index is that its calculation is heavily skewed to the downside options, which explains why its premium in excess of at-the-money implied volatility is characterized as the price of tail risk.

To illustrate the VIX® Index calculation, we plot the interpolated implied volatility for each option in context, known as the VIX® Index strips, for December 31, 2020, and March 31, 2021. 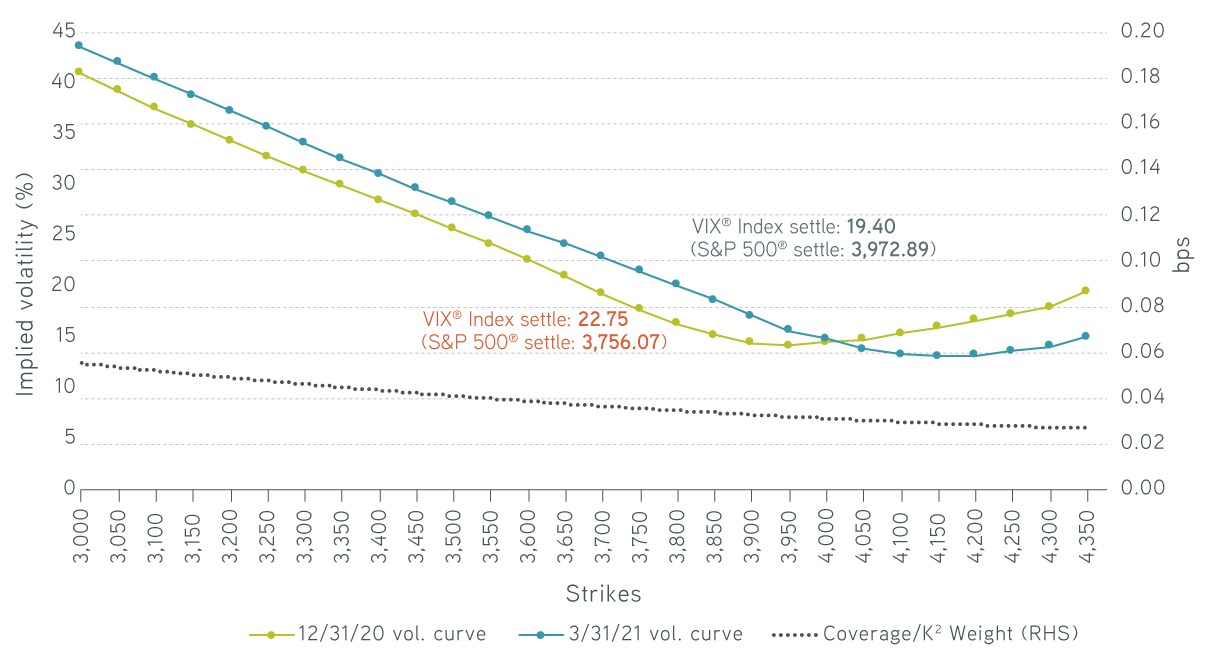 Source: Bloomberg, 4/21/2021. For illustrative purposes only. It is not possible to invest directly in an index. Not a recommendation to buy or sell any security.

We aim for persistent return without forecasts

In the likeness of bond duration and its calculation (small yield curve shocks), the VIX® Index can be recalculated at specific dates through adjustments in the underlying S&P 500® price while holding implied volatilities constant. The below graph plots the model-calculated values on the vertical axis against the underlying S&P 500® level on the horizontal axis for two surface snapshots on the same dates as the above graph. 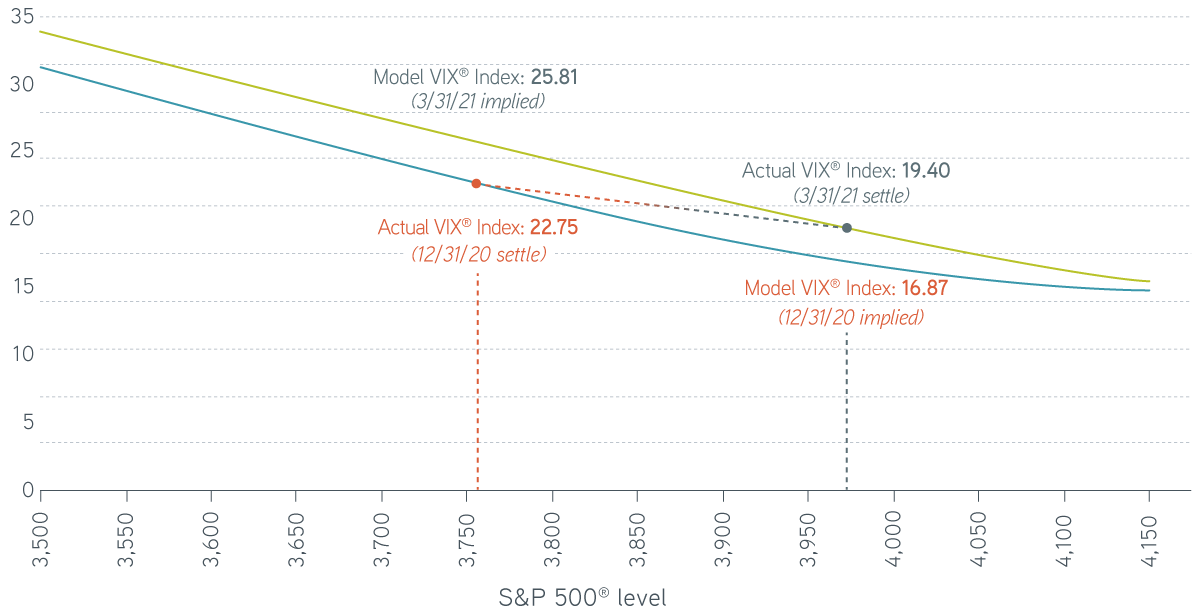 Source: Bloomberg, 4/21/2021. For illustrative purposes only. It is not possible to invest directly in an index. Not a recommendation to buy or sell any security.

We can deduce from this analysis that the realized drop in the VIX® Index from 22.75 to 19.40 was much less severe than what the volatilities curve predicted at year-end. We could infer that the stickiness of implied volatilities with respect to moneyness and delta—or flotation alongside the spot price—suggests a lack of conviction in reduced forward-looking volatility alongside higher S&P 500® valuations. This could of course indicate incrementally higher demand for downside optionality than what we first expected. While the absolute equilibrium level of anticipated variance fell quarter-over-quarter, the lower-than-expected drop translates into a much higher implied level of forward-looking variance given a return to the prior quarter’s S&P 500® level.

Assuming stickiness in the behavior of implied volatilities should a sell-off ensue, the VIX®Index calculation will be much higher than what was implied for those specific S&P 500® levels at the end of the year. We believe this to represent a continued lack of supply in tail-risk protection as a result of last year’s shocks. As such the equilibrium price of drawdown protection from increasing all-time highs remains stronger than it would have been without the tail event that occurred in the spring of 2020.

The Cboe Volatility Inde® (the “VIX® Index”) is used as a measure of the implied volatility of S&P 500® index options. “Cboe®” and “VIX® Index” are registered trademarks of Cboe Global Markets, Inc. or its affiliates (“Cboe®”). Cboe® makes no representation regarding the content of this material. Options are not suitable for all investors and carry additional risks. Investors must ensure that they have read and understood the current options risk disclosure document before entering into any options transactions. In addition, investors should consult with a tax, legal, or financial advisor prior to contemplating any derivative transactions. The options risk disclosure document can be accessed at  https://www.theocc.com/Company-Information/Documents-and-Archives/Options-Disclosure-Document.