The Market Thinks It Can Predict What the Federal Reserve Will Do. It Can’t.


Markets, particularly liquid markets, contain a lot of information, and for that reason most economists agree that we should pay attention to what they can tell us about the broader economy, at least in the short term.

But are markets good at predicting everything? When it comes to the Federal Reserve’s decisions about interest rates, the answer seems to be no.

The Fed met June 18–19 amid expectations that it will cut rates in the second half of the year. Many market participants believe Fed action is necessary to offset the perceived economic slowdown taking hold in the US and globally. For equity investors, a cut in interest rates is perceived as the elixir that cures all ills. Look no further than the June employment report to see how this plays out.


Entering June, the market was expecting the US economy to add somewhere in the neighborhood of 175,000 jobs. On June 7 the Bureau of Labor Statistics announced that the US economy added a paltry 75,000 jobs and revised down its estimates for March and April. US stocks rallied after the release of the report, with market participants convinced that the weak results gave the Fed cover to begin cutting rates.

In fact, it’s clear now that the market is expecting the Fed to fully reverse course and cut rates multiple times in the next year. How do we know this? We can observe market expectations through Fed funds futures, which trade in volume every day on the Chicago Mercantile Exchange. Every article I see about potential Fed rate changes points out market expectations by referring to the Fed funds futures market. That’s why I found the graph below, originally published by Deutsche Bank and adapted by Parametric’s research team, so interesting. 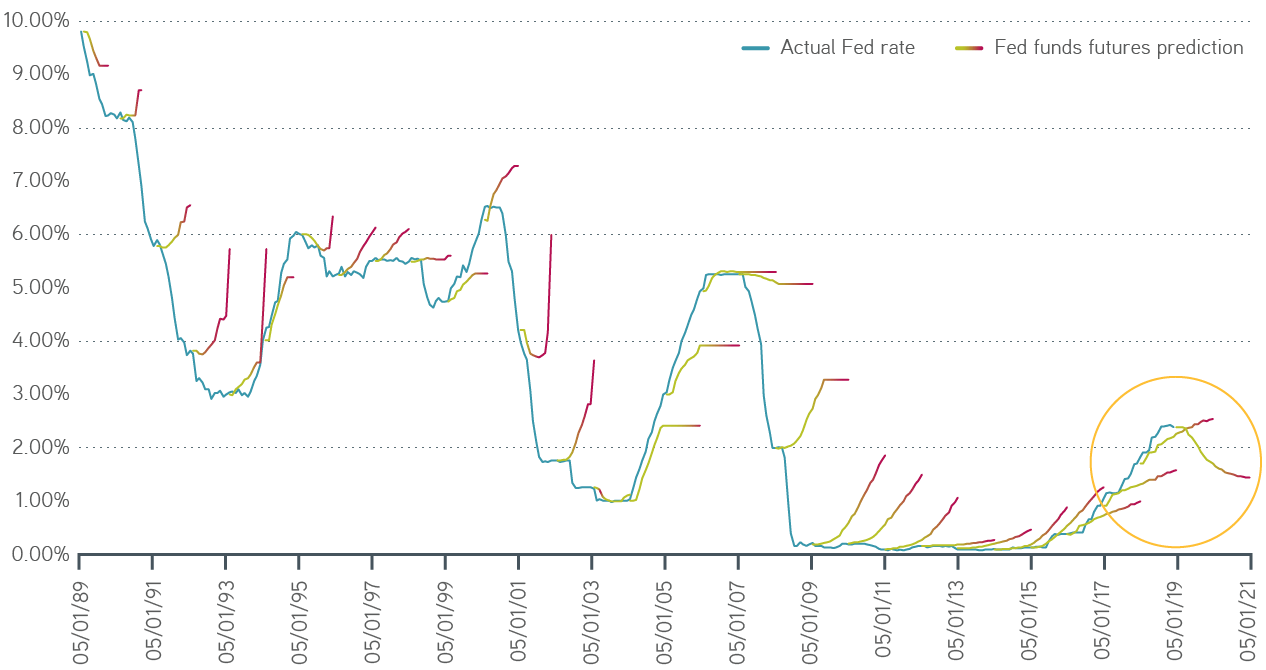 Source: Deutsche Bank Research, Parametric, 6/12/2019. For illustrative purposes only. Not a recommendation to buy or sell any security. All investments are subject to risk of loss.

Deutsche Bank looked back at the past 18 years to see exactly how well the Fed funds futures did at predicting what the Fed would subsequently do. Not too well, as it turns out. Our research team expanded the graph back all the way to 1989 and found similar results, as the chart above shows. During the years immediately after the global financial crisis, for example, the market consistently expected the Fed to raise rates, but for nearly seven years it never did. Similarly, once the Fed did start raising rates, in the fourth quarter of 2015, the market repeatedly expected it to slow down. And yet it didn’t.

As we can see on the right-hand side of the chart, circled in yellow, the market now appears to expect the Fed to cut rates by approximately 0.5% to 1% over the next 12 months. Why do we think the market will be better at predicting the future now when it’s been so challenged at doing so in the past?


The bottom line
One would expect Fed funds futures—which trade in a market that’s deep and liquid—to be more accurate in determining the timing of Fed rate changes. The fact that it’s been consistently incorrect in the past argues, at least in this case, to be cautious about accepting what the market is telling us about Fed policy in the future.