Longer life expectancy, fewer births, and decreasing immigration are converging to present a serious demographic challenge for the US economy—and it won’t leave investors unscathed.

The first round of US census data was released at the end of April. As of Census Day on April 1, 2020, the US population stood at 331.5 million. This means the just-completed decade yielded the second-lowest population growth rate for the US since the census was first taken in 1790: a mere 7.4%. Only the decade of the Great Depression experienced a lower growth rate than the 2010s. 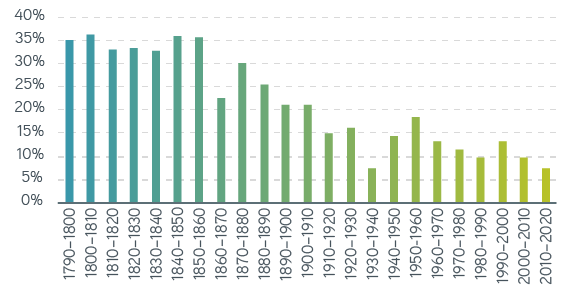 Two major factors contributed to this slowdown. First, like many developed nations, the US is seeing a fertility rate (the number of children produced by the average American woman) well below the rate needed for a population to sustain itself—that is, not enough children are being born to replace US citizens who die each year. Just as significant is the indication from preliminary census data that the US experienced a decline in the foreign-born population in the 2010s. Since immigration has historically been a critical contributor to US population growth, this decline further aggravates the weakening in the country’s population growth rate.


Why does this slowdown in population growth matter for financial markets? The easy answer is that demographics impact almost every aspect of the economy. The age distribution of a country’s population directly influences savings rates, housing demand, consumption patterns, demand for specific financial securities, and many other critical measures. Possibly the most critical variable demographics impact is the available supply of labor to the economy. Changes in labor supply and productivity are key inputs to economic growth. If the labor supply growth slows or stalls, productivity must increase—no easy feat—or economic growth will also slow or stall. Some empirical studies have even suggested that GDP growth slows at a roughly one-for-one rate with a decline in population growth.  This slower economic growth creates a headwind for equities. It also makes it more likely that interest rates remain relatively low. Japan is often used as the example of what happens to a country whose population growth stagnates for an extended period.

Create a flexible, personalized portfolio for your clients

We expect to get the next release of the 2020 census data some time in August. This round will include more granular details about the makeup of the US population. We can already use preliminary data to trace out one accelerating consequence of this slowdown in population growth: The US is getting older.  Longer life expectancy, coupled with a reduced birth rate and decreasing immigration, means the median age of Americans is rising. Demographers currently project that the US will have more adults over the age of 65 than children under 18 by the year 2035.


The aging population will directly impact financial markets in many ways. An older population will strain public budgets as the demand for direct transfer programs like Social Security and Medicare grow in size. The uptick in demand for these benefits is happening at the same time the ratio of older adults to working-age adults, also known as the old-age dependency ratio, is projected to rise. Assuming benefits aren’t materially reduced—a reasonable assumption given how politically challenging it would prove—the only options are deficit spending or higher taxes. While we can’t say with any precision how this trade-off will work out, we can say that because of the stress an aging population puts on public budgets, it will become increasingly difficult to reduce taxes. There will also be constant pressure on politicians to increase deficit spending.


A stagnant and aging population presents headwinds for economic growth while placing a bigger burden on public budgets. Investors need to be mindful of these longer-term trends while constructing their portfolios. Parametric stands ready to assist investors in creating customized multiasset solutions that best meet their investment needs.