To Capture the Volatility Risk Premium, Patience Is a Virtue


As the first quarter of 2020 draws to a close, we look to the future and see a big wall of worry to climb

Undoubtedly, many investors bear some of the same fears they had one year ago: that macro data signals a slowing economy, that central banks are making policy errors, that trade wars or the coronavirus could spark a global recession.


Nevertheless the S&P 500® climbed the wall to reach fresh all-time highs in 2019, returning +31.5%. Against this backdrop, the volatility risk premium (VRP), which measures implied versus realized volatility, was very robust. Does that imply that worry is a good thing with respect to such exposure? Not necessarily, but history has shown us that the odds are stacked well in favor of investors with the patience to reap and keep the fruits of the VRP.

Keep a historical perspective on the VRP


It’s important to understand the effect that recency bias can have on beliefs about the future returns and risks of financial markets. We consider it vital to maintain a historical perspective and resist shortsighted emotions that often get in the way of meeting long-term investment goals. Such perspective should come from a historical period that strikes an appropriate balance between longevity and the propensity for structural change. Let’s remember that, in finance, we’re dealing with human beings who have ever-evolving preferences and norms. This applies to all realms of financial markets and their associated risk premiums such as equity, credit, and volatility.


In this blog post our historical perspective on the VRP will focus on the past 10 years in the spirit of capping off a decade. Let’s take a look at the period in hopes of clarifying a viewpoint that may have been muddied by recency bias.


The below table characterizes the annual VRP environment for the S&P 500® Index by four metrics. The first column details the percentage of daily observations during which the one-month implied volatility (IV) was greater than the time-lagged realized volatility (RV). The second and third columns provide the mean IV and RV for the year. The final column provides a representative cumulative profit or loss associated with a systematic short variance exposure, which we discuss further below. 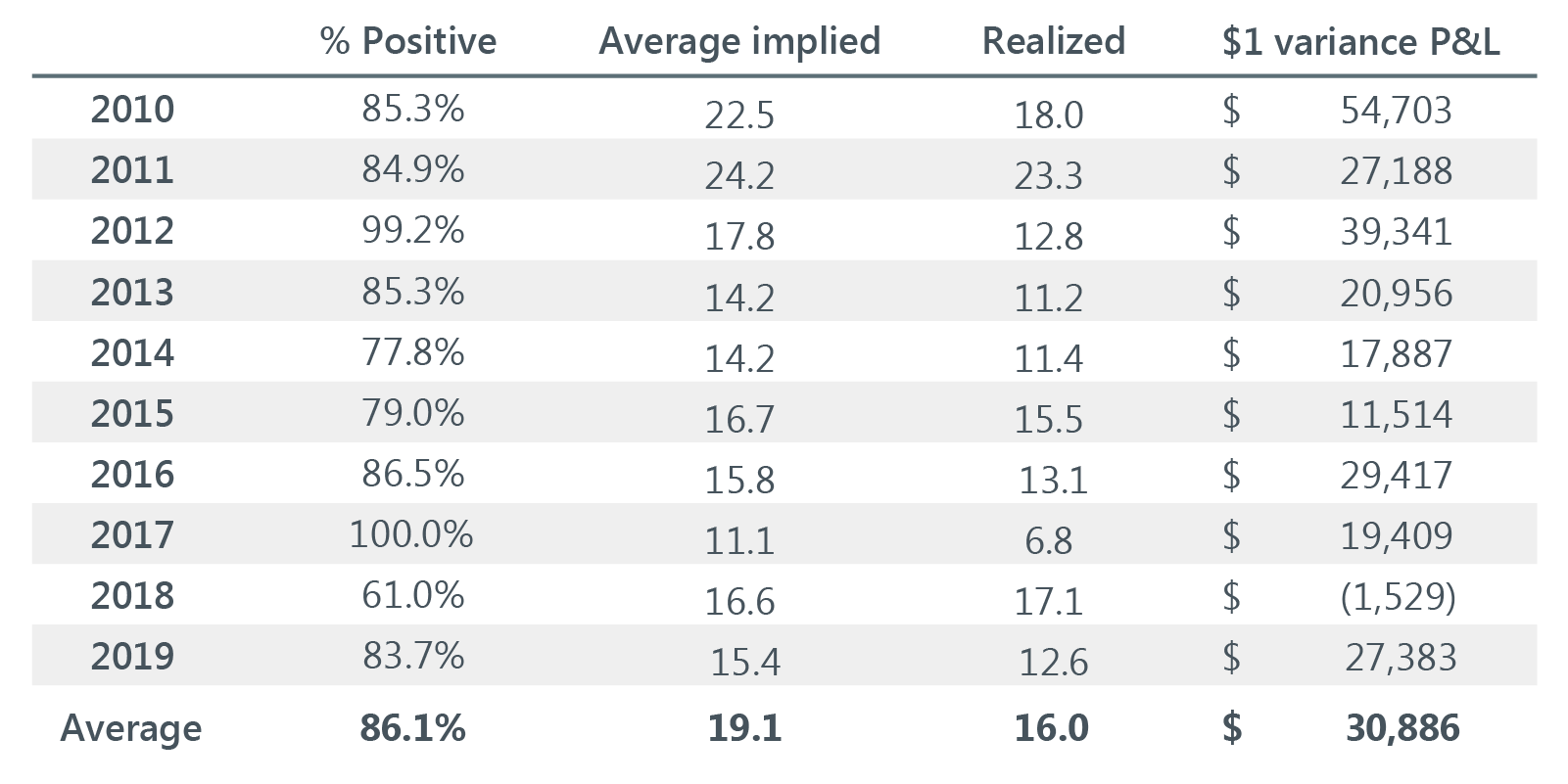 Source: Bloomberg, January 2, 2020. For illustrative purposes only. Not a recommendation to buy or sell any security. It is not possible to invest directly in an index.

Now that we’ve addressed historical implied and realized volatilities, what can we say about the profitability of a strategy exposed to the VRP? We care more about runs than hits in baseball, right? This is where the above table’s fourth column comes into play. It characterizes investment success, or lack thereof, for a given calendar year during which our hypothetical portfolio holds systematic exposure to short variance. But wait—variance? What happened to volatility?


If we dust off our high school statistics textbooks, we’ll likely find a chapter that defines variance as equal to volatility squared. Simply stated, volatility multiplied by itself is what leads to variance. Most investors would prefer a simple, direct exposure to volatility and not variance, its quadratic brother. Unfortunately, for reasons outside the scope of this post, financial instruments such as options are more closely linked to variance. In that context we evaluate short variance performance by comparing what’s credited or collected (implied volatility squared) with what’s debited or paid out (realized volatility squared).


The fourth column in the table provides the annual profit and loss for a hypothetical exposure, deployed daily, that was credited or debited $1 for each point of variance surplus or deficit. For example, the strategy would receive $400 with an implied volatility of 20 and pay out $100 with a realized volatility of 10 (IV2 – RV2). The most successful year would have been 2010, propelled by a persistently rigorous average implied versus realized spread. And 2018 was, well, exactly what we’d expect it to be, given the below-average persistency and implied versus realized deficit: a lackluster year for performance.


Finally, it’s important to note that traditional option-writing strategies don’t have the convenience of simplifying attribution to the IV versus RV spread for an important reason: They typically retain market exposure over the option life cycle as opposed to neutralizing or “washing” daily through hedging. However, they’re fully exposed to the tailwind that is the VRP, which is essential to long-term profitability.

Be aware of factors in option pricing and VRP outcomes
Given a sliver of historical perspective, let’s turn our attention to the future. While we aren’t in the business of making market predictions, we maintain a strong awareness of the likely factors that influence option pricing and potential outcomes for VRP exposure. Most inputs in the option pricing model—such as interest rates, dividend yield, the S&P 500® Index price—are objective. The subjective component is the expected future volatility of the S&P 500®. We can back out the implied volatility given a particular option price. The implied volatility of S&P 500® options is the market-clearing level of anticipated price volatility, a level impacted by a host of factors. We can break down these factors into four buckets.


Bucket 1: Recent market volatility
Common sense suggests it isn’t safe to drive using only the rearview mirror. But if a particular market has been volatile in the recent past, there’s a strong probability it’ll continue to be volatile in the near future.


These are sources of uncertainty that are known and typically penciled in the calendar well in advance—economic data reports, elections, referendums, and policymaker summits, for example. The biggest known unknown for 2020 is quite obvious: the presidential election. While we don’t know who will win, we know we’ll find out on or about November 3. We also know that on Super Tuesday (March 3) prospects will be clarified for all remaining candidates for the Democratic Party presidential nomination, which will shape beliefs about the outcome of the election itself.


This refers simply to the balance of supply and demand. How much risk-bearing capital is available to insure risks in the market on the supply side? How much hedging flow exists on the demand side? Increased regulatory scrutiny on global systematically important banks (G-SIBs) has limited the supply of risk-bearing capital. Prior to Basel III, G-SIBs had greater flexibility in bearing risk on the balance sheet.


We can’t predict with any level of certainty the returns derived from exposure to the VRP in 2020. What we can do is determine a range of likely outcomes based on empirical evidence while respecting known and unknown sources of uncertainty. If you’re willing to wait and see, history suggests you’ll be compensated.