As climate change laws take shape, many fossil fuel reserves may become unusable—but can investors still find value in the companies that own the reserves?

Even before oil and gas prices collapsed on the back of cratering demand this spring, the drumbeat on “stranded assets” had been growing louder. The worry refers to fossil fuel reserves that may become unusable if governments limited their consumption in order to help shift the trajectory of climate change. Over the years, many have attempted to model these scenarios. These attempts typically concluded that stranded assets appear to be unpriced risks—but is this true? If so, what should we do about it?


How are stranded assets calculated?
A stranded asset scenario requires two important calculations. The first is the potential carbon emissions from the world’s oil, natural gas, and coal reserves—if they were to be burned. The second is the maximum amount of carbon emissions that could be burned before average global temperatures increased by an amount—typically 1.5 or two degrees Celsius. This is the carbon budget. Any potential emissions in excess of the carbon budget are considered unburnable—or stranded.

Common findings under the carbon budget approach are that up to 80% of the world’s reserves are unburnable and that the market cap of any oil, gas, or coal companies should be reduced by substantial margins to account for this. But what receives less attention is the quality of the reserves data or how the companies that own them are valued.


Fossil fuel reserves: How much is out there?


Unlike acres of trees or heads of cattle, no one knows how much unextracted oil, gas, or coal actually exists. Estimates have improved over time with technological advances, but it’s only a best guess until the fuel is extracted. Locked under the earth and the ocean, the true quantity of reserves is never perfectly knowable. Furthermore, much of it isn’t economical to extract.


To account for mysteries surrounding oil and gas reserves, most analysis tends to focus on proved reserves, ignoring probable or possible reserves. This is one way of focusing on reserves that are the most likely to be extracted. But even proved reserves are far from completely certain. OPEC countries have been accused of deliberately overstating their proved reserves to exert upward influence on the amount they’re allowed to produce—and this has been a particular issue in Venezuela. In 2004 the oil and gas company Shell shocked investors by admitting it had overstated proved reserves by more than 20%.


Uncertainty around proved reserves doesn’t come from only shenanigans. Proved reserves are still an estimate—even when done with best intentions. And under SEC and US Energy Information Administration (EIA) reporting requirements, companies must adjust proved reserves depending on recent oil and gas prices. This means that when prices rise, proved reserves are adjusted upward and when prices decline, they‘re adjusted downward. These changes are summarized in the EIA’s annual reports. Between 1984 and 2018, net revisions and adjustments were positive in most years, but we do see occasional years with substantial negative adjustments after oil or natural gas prices fell sharply. 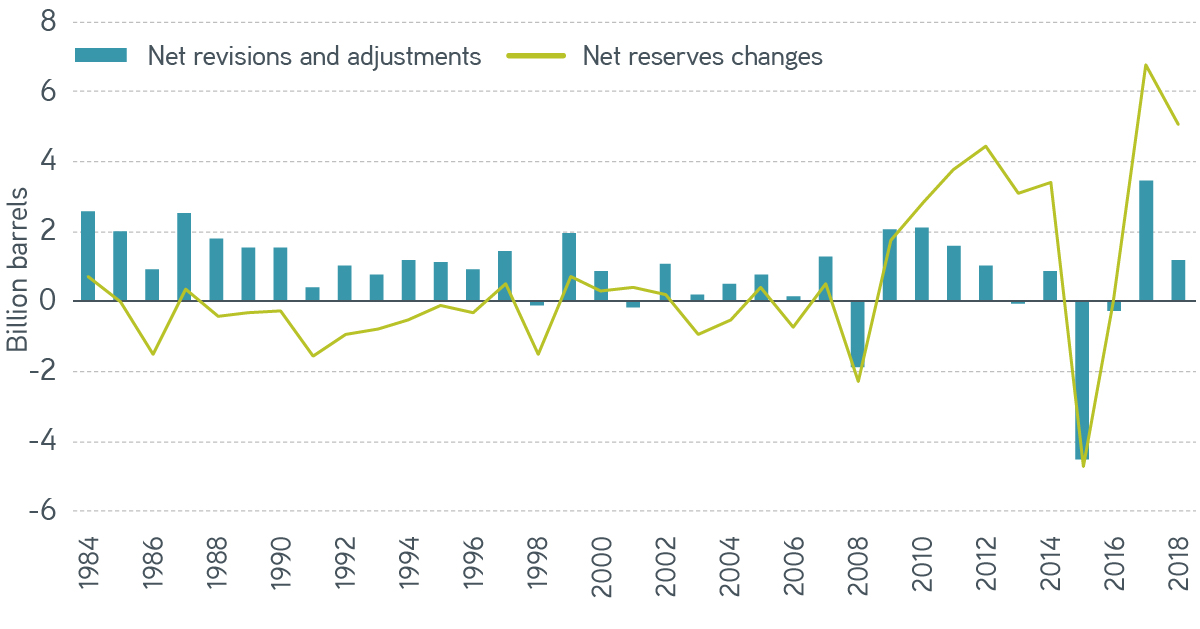 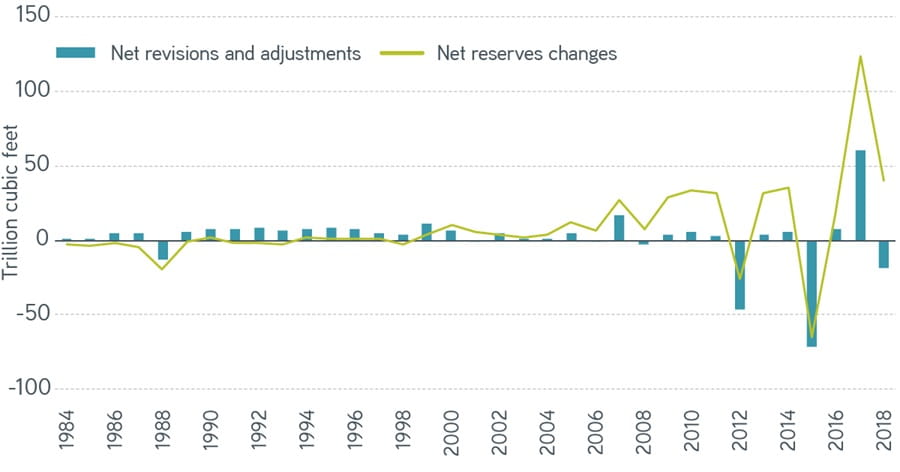 
In the case of coal, prices don’t affect proved reserve estimates in the same way, but it’s still useful to distinguish between reserves that could theoretically be extracted from those that are most ready to be extracted. For example, let’s look at the US, which is believed to hold 24% of the world’s coal reserves. The EIA estimated total US proved reserves at 253 billion short tons in 2019. However, reserves at producing mines were only 15 billion short tons. Furthermore, that figure is down 25% from the peak of 20 billion short tons at producing mines in 2013.

The point of discussing reserves isn’t to detract from the real concern about the extraction and use of fossil fuels—it’s to draw attention to the difficulty of calculating the precise quantity of reserves that may potentially be stranded.

Who owns fossil fuel reserves—and what are they worth?


For the time being, let’s leave aside questions about the amount of reserves that could be stranded so we can consider who actually owns them and how they’re valued. After all, the risk to an investor occurs only if the assets that they own are stranded. As it turns out, the majority of global fossil fuel reserves are owned by governments via state-owned companies. This leaves a relatively small share of global fossil fuel reserves controlled by the publicly traded companies that receive most of the scrutiny on this issue. In fact, some observers have conceded that burning all proved oil, gas, and coal reserves owned by publicly traded companies would take up less than 20% of the total carbon budget under a two-degree scenario.


Even so, let’s consider for a moment how stranded assets might impact the market value of publicly listed companies. Like any operating company, fossil fuel companies are valued on the expected cash flows from their assets, not the market value of the actual assets. One easy way to see this is to examine enterprise value to the million barrels oil equivalent (EV/BOE) across the oil and gas sector. For example, Aswath Damodaran, the New York University finance professor regarded as the “dean of valuation,” calculated the EV/BOE last November for 26 of the world’s larger oil and gas companies, which ranged in price from $4.12 to $58.42 per BOE.


Why such disparity in valuation? One reason is that oil and gas companies have non-reserve-owning businesses that contribute to varying degrees of enterprise value. A second reason is that not all reserves are created equal. Some are far costlier to develop or bring to market—and some are of lower quality and fetch a lower price point. Additionally, some reserves are more uncertain than others, which makes cash flows less likely. A third reason is that reserves are naturally finite. This means oil and gas companies are valued in part by their ability to find and develop more reserves. This feature makes fossil fuel companies a going concern rather than a depleting asset. While having skill in finding or developing reserves would be less desirable in a carbon-constrained world, the human capital and engineering prowess that enables this activity may still hold some value.


Two points follow from all this. The first is that you can’t assume that all investor-owned companies would be affected in the same way, even if some assets were stranded. The second is that fossil-fuel-reserves-based businesses may be affected by their perceived ability to diversify and proactively transition to a lower-carbon world. This is something many oil and gas companies have already been contemplating. Last week BP announced that it lowered its long-term price forecast, acknowledging the expectation of lower cash flows from its traditional fossil fuel business. The announcement reinforced its February statement ensuring that it would help the world reach net zero carbon by investing in non-oil and -gas businesses and advocating for a price on carbon—among other initiatives. Remaking a business strategy is no small feat—but neither is extracting oil from under the seafloor.

What’s an investor to do?


Public equity investors who are concerned about stranded assets should encourage their asset managers to vote or engage with companies to ensure they’re planning for a carbon-constrained future. This may mean contemplating new business strategies for fossil fuel producers. For companies that are heavy fossil fuel consumers, this may mean looking for ways to reduce their emissions by either burning carbon more cleanly or burning less carbon altogether.


Shareholders filed more than 40 proposals focused on the topic of carbon asset risks during the 2020 proxy season. Impressively, one out of every five of these proposals was withdrawn because companies agreed to improve their disclosures by detailing their transition plans. This shows that active ownership can be a very effective strategy for encouraging companies to improve their stranded asset risk management.

Investors with more risk appetite may consider investing in disruptive energy technology start-ups. After all, the biggest problem with fossil fuels isn’t that we can’t live without them but that we don’t know how to live without them. Current renewable energy sources suffer from intermittency, low productivity, and low energy density. In other words, they’re mostly unavailable when you need them, produce relatively little energy relative to capacity, and take up vastly more space than fossil fuel or nuclear-based units with equivalent output. It will take lots of capital and intense ingenuity to remake these renewable realities, but there is no other way.

How Can Advisors Use Direct Indexing to Deepen Client Relationships?

Get up to speed on a growing investment solution that offers a wide range of advantages. Test your direct indexing smarts.