This report summarizes how Parametric voted on behalf of its clients for all shareholder meetings that took place from July 1, 2018, through June 30, 2019. Parametric had voting authority on approximately $109 billion in equity exposure as of June 30, 2019.


Geography
Parametric voted at shareholder meetings in 89 different countries. The majority of these meetings occurred in the US and across a number of Asian countries. 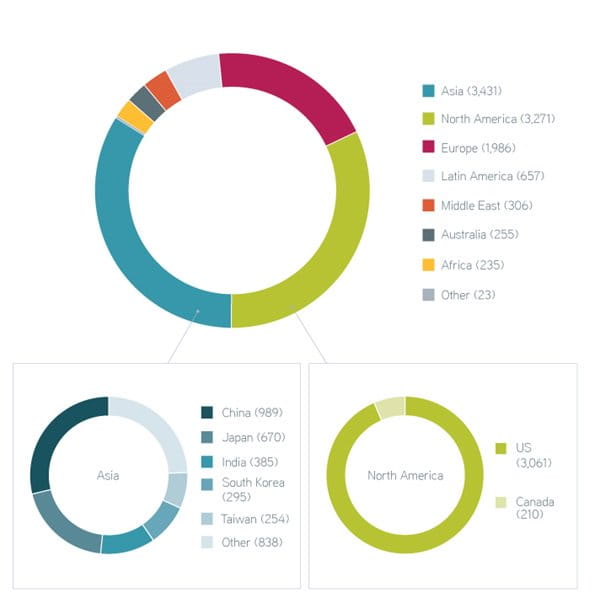 
Management proposals
Of the 96,446 management proposals, the vast majority were related to director elections (53%) or routine business (24%). Routine business captures a wide range of activity, such as ratification of auditors, approval of meeting minutes, and allocation of income. The rest of the proposals were related to executive compensation, capital management, and mergers.


Figure 2: Number of votes on management proposals by category 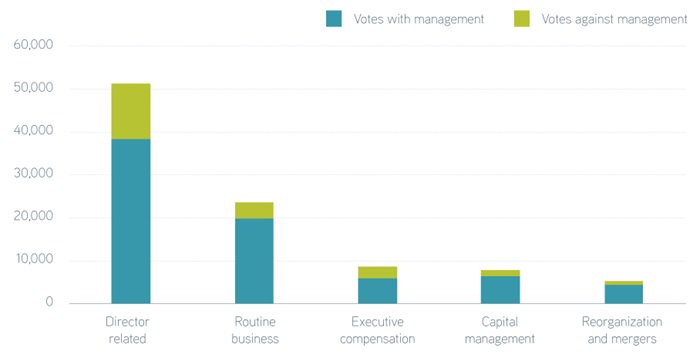 
Of 51,221 proposals related to director elections, Parametric voted against management on 12,910 proposals, or 25%. Many of these votes were due to either a lack of majority independence on the board or director non-independence on nominating, audit, or compensation committees. We believe the independence, competence, and responsiveness of directors is paramount. Board composition is one of Parametric’s key areas of focus.

Of 5,174 reorganization and merger proposals, Parametric voted against management on 721 proposals, or 14%. Parametric has typically supported mergers that appear likely to increase shareholder returns over the long term and considers multiple factors, such as the strategic rationale, the premium or discount being offered, and potential conflicts of interest.


Figure 3: Number of votes on shareholder proposals by region

Nuclear energy
Parametric didn’t support a shareholder proposal at Tokyo Electric Power to decommission, halt debris removal from, and freeze the Fukishima Daiichi nuclear power station for 60 years. We believed this decision was best left to the discretion of the board, which oversees management. Parametric didn’t support similar proposals at other Japanese companies to phase out or materially change the use of nuclear facilities.

Gender pay equity
Parametric supported shareholder proposals at Amazon, Google, and 12 other companies to publish reports on the median pay gap between male and female employees. While some of these companies already had disclosed some gender pay statistics, we believed that additional disclosure would benefit shareholders.

However, the number of environmental proposals going to a vote has decreased since 2016, likely due in part to the increased effectiveness of shareholder engagement. Parametric has been supportive of proposals that ask for additional disclosures of material risks to the business while being mindful of the costs of additional reporting. Parametric supported all 10 shareholder proposals asking for reports or assessments of climate-related policy, including one of this nature at Amazon.

Non-climate environmental proposals
Parametric voted in support of all 15 environmental shareholder proposals at US companies outside of climate risk disclosure, covering topics such as water pollution and sustainable packaging.

One example of a proposal we supported was a report on sustainable packaging at Starbucks. We believed that additional disclosure would be helpful to shareholders in assessing salient environmental risks and encouraging the organization to manage packaging responsibly. Generally, Parametric has been supportive of nonbinding shareholder resolutions that provide new information about potential material risks to shareholders at reasonable costs.


References to specific securities and their issuers are for illustrative purposes only and are not intended to be, and should not be interpreted as a recommendation to purchase or sell such securities. Any specific securities mentioned are not representative of all securities purchased, sold or recommended for advisory clients. Actual portfolio holdings vary for each client and there is no guarantee that a particular client’s account will hold any, or all, of the securities identified. It should not be assumed that any of the securities or recommendations made in the future will be profitable or will equal the performance of the listed securities.