A Brief History of Parametric

It started with a question. What if the stories traditionally told about a publicly traded company—about its product lineup, its management team, its assets, its liabilities, and other things one might read in an annual report or hear on a quarterly earnings call—were too often just that: stories?


What if there were a different way to look at the role public securities play in an investor’s portfolio? What if there were more value in looking at stocks’ demonstrated risk-return attributes than in companies’ balance sheets? In other words, what if one could engineer a purely quantitative, systematic, scientific way to invest? Three men were convinced they could. 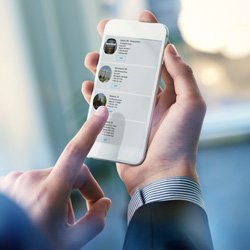 In the spring of 1987, Bill Cornelius, Mark England-Markun, and Randy Lert, who were working at Russell Investments in Tacoma, Washington, decided to break out on their own to found a company that would devote itself to a then-new investing discipline: one centered around the principles of market efficiency, transparency, attention to cost and risk, and a healthy skepticism of traditional active management.


With seed money from Pacific Mutual Life Insurance (PIMCO’s initial parent company), they called their new firm Parametric, naming it after a mathematical equation commonly used to describe the relationship among points on a curve—that is to say, its parameters. To some it may have sounded nerdy, but to a fledgling company focused on using technology to execute its mathematical strategies, it fit.


And speaking of technology, computing power—the lifeblood of any firm attempting to deliver on its quantitative strategies—was relatively primitive in the late 1980s. What today we can produce in a few moments took those early systems hours (sometimes even overnight) to churn out. So while we worked hard to test the limits of what technology could do at the time, the firm remained small in its early days.


But small didn’t necessarily mean under the radar. Parametric had already attracted the attention of a number of investors intrigued by quant strategies and their potential to deliver transparent, repeatable outcomes.

We continued to serve clients seeking quant strategies, but the Parametric of today wasn’t truly born until 1992 when, to help address an investor challenge faced by a large family office, we created our first custom portfolio designed around a client-chosen benchmark. The client sought a portfolio that behaved like an index but was thoughtful about taxes—without compromising pretax performance.

It was the seed of direct indexing and what would eventually become our Custom Core® SMA strategy, and it began simply by listening to a client’s need and figuring out how to meet it. Not only does Custom Core remain one of our most prominent solutions, but that same family office is still a client today.

Parametric parted ways with Pacific Mutual in 2001 and went independent. But the firm remained open to a long-term relationship with the right strategic partner. That partner came along in 2003 in the form of Boston-based asset manager Eaton Vance, a firm with a similar thoughtfulness when it came to advising taxable investors. Eaton Vance took a majority stake in Parametric, bolstering its custom SMA business by providing Parametric with access to advisory platforms, support for product development, and distribution expertise.

Along the way, Parametric began to expand its offerings and its business, attracting interest from more family offices as well as registered investment advisors. In 2007 Parametric invested in and eventually acquired Managed Risk Advisors, a Westport, Connecticut–based firm that specialized in options and other derivatives. This added another dimension to the customization Parametric could offer its clients, and by 2011 the firm had over $41 billion in AUM. But Parametric didn’t stop there. And thanks to another partnership, the firm was about to grow by leaps and bounds.

The Clifton Group, based in Minneapolis, worked largely in the derivative overlay space, helping endowments, foundations, pension plans, health care entities, and other large funds solve their exposure challenges. Whether the goal was to securitize cash holdings, rebalance a portfolio, or reduce funded-status gaps, Clifton had a systematic, quantitative approach similar to Parametric’s. It was a match that made sense. The two joined forces under the Parametric brand name the following year, bringing Clifton’s large institutional client base to Parametric and catapulting the firm’s AUM to close to $92 billion.

Today Parametric manages more than $400 billion in assets across an array of products and strategies, including not just Custom Core and overlay but also responsible investing, factors, emerging markets, liquid alternatives, fixed income, and more. The firm became part of Morgan Stanley in 2021 when it acquired Eaton Vance, but it remains proudly independent in its approach and spirit.

Indeed, the same ideas that animated the firm in 1987 still reverberate today: efficiency, transparency, attention to cost and risk, and listening intently to client needs—and then building a custom portfolio around them. The people may have changed. The technology may be different. But Parametric continues to foster a culture that never stops asking, “What if?”